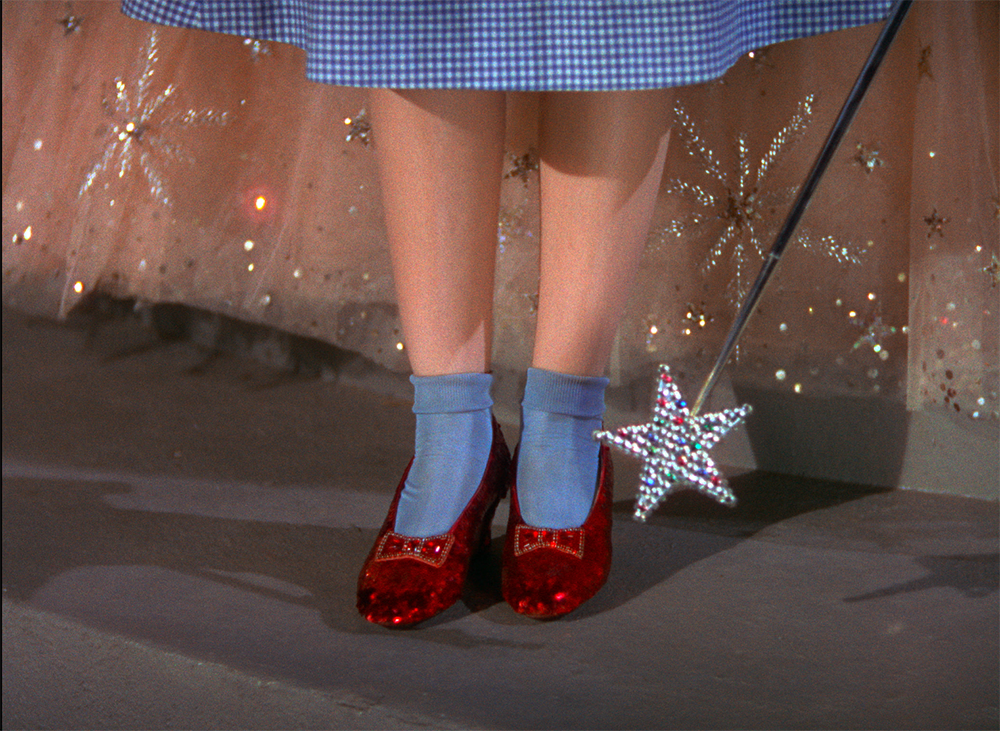 The Colorful Wizard of Oz

Beautifully restored in 4K, one of the most iconic films to come out of the Golden Age of Hollywood has been an inspiration to filmmakers since it first graced the silver screen in 1939. The Festival of Preservation will host two screenings of The Wizard of Oz, with an introduction from filmmaker/essayist Alexandre Philippe via Zoom prior to the Sunday screening. Philippe’s most recent film, Lynch/Oz, highlights filmmaker David Lynch’s fascination with Oz and how it influenced his films, such as Lost Highway, the new restoration of which will play Friday as a part of the Festival of Preservation.

Philippe spoke with Business Doc Europe about the film prior to it’s Tribeca premiere:

“A certain sort of rabbit hole opens up and I feel like I want to go down [it],” Alexandre O. Philippe explains of his highly cinematic, entertaining and academic [but far from stuffy] exploration of the much-attested to relationship between The Wizard of Oz and the films of David Lynch. “I wanted to see how far this actually goes…it’s a film about, if you will, the mysteries of influence and inspiration.”

“The long-standing symbiosis between America’s primordial fairytale and its greatest, most popular surrealist is not only a Hollywood phenomenon without precedent; it stands as one of the most fascinating puzzles in the history of cinema,” adds Philippe in his notes for the film.

In Lynch/Oz, sold by Dogwoof, the director is joined down the rabbit hole by five filmmakers and a critic whom he invited to provide detailed observations on the conjecture, which were subsequently shaped into essays narrated by each and illustrated with hundreds of clips from Oz, the films of Lynch himself and scores of other works influenced by Victor Fleming’s 1939 masterpiece.

Another great mind inspired by The Wizard of Oz is Salman Rushdie, who wrote an essay revisiting the film for The New Yorker in 1992:

The makers of “The Wizard of Oz” clearly decided that they were going to make their color as colorful as possible, much as Michelangelo Antonioni did, years later, in his first color feature, “Red Desert.” In the Antonioni film, color is used to create heightened and often surrealistic effects. “The Wizard of Oz” likewise goes for bold, Expressionist splashes—the yellow of the Brick Road, the red of the Poppy Field, the green of the Emerald City and of the Witch’s skin. So striking were the film’s color effects that soon after seeing the film as a child I began to dream of green-skinned witches; and years afterward I gave these dreams to the narrator of my novel “Midnight’s Children,” having completely forgotten their source. “No colours except green and black the walls are green the sky is black . . . the stars are green the Widow is green but her hair is black as black”: so began the stream-of-consciousness dream sequence, in which the nightmare of Indira Gandhi is fused with the equally nightmarish figure of Margaret Hamilton—a coming together of the Wicked Witches of the East and of the West.

Dorothy, stepping into color, framed by exotic foliage, with a cluster of dwarfy cottages behind her, and looking like a blue-smocked Snow White, no princess but a good, demotic American gal, is clearly struck by the absence of her familiar homey gray. “Toto, I have a feeling we’re not in Kansas anymore,” she says, and that camp classic of a line has detached itself from the movie to become a great American catchphrase, endlessly recycled, and even turning up as one of the epigraphs to Thomas Pynchon’s mammoth paranoid fantasy of the Second World War, “Gravity’s Rainbow,” whose characters’ destiny lies not “behind the moon, beyond the rain” but “beyond the zero” of consciousness, in a land at least as bizarre as Oz.

But Dorothy has done more than step out of the gray into Technicolor. Her homelessness, her unhousing, is underlined by the fact that, after all the door play of the transitional sequence, and having now stepped out-of-doors, she will not be permitted to enter any interior at all until she reaches the Emerald City. From tornado to Wizard, Dorothy never has a roof over her head. Out there amid the giant hollyhocks, which bear blooms like old gramophone trumpets, there in the vulnerability of open space (albeit open space that isn’t at all like the Kansas prairie), Dorothy is about to outdo Snow White by a factor of nearly twenty. You can almost hear the M-G-M studio chiefs plotting to put the Disney hit in the shade—not simply by providing in live action almost as many miraculous effects as the Disney cartoonists created but also by surpassing Disney in the matter of the little people. If Snow White had seven dwarfs, then Dorothy Gale, from the star called Kansas, would have a hundred and twenty-four.

The restoration process was described in a postPerspective article, in which Barry Goch details the tour he received from Burbank’s Warner Bros. Motion Picture Imaging (MPI):

The Wizard of Oz, which starred Judy Garland, was shot on a Technicolor three-strip camera system. According to Bailey, it ran three black and white negatives simultaneously. “That is why it is known as three-strip Technicolor. The magazine on top of the camera was triple the width of a normal black and white camera because it contained each roll of negative to capture your red, green and blue records,” explained Bailey.

“When shooting in Technicolor, you weren’t just getting the camera. You would rent a package that included the camera, a camera crew with three assistants, the film, the processing and a Technicolor color consultant.”

MPI scanned each of the three-strip Technicolor nitrate film negatives at 8K 16-bit, composited them together and then applied a new color grain. The film was rescanned with the Lasergraphics Director 10K scanner. “We have just under 15 petabytes of storage here,” said Bailey. “That’s working storage, because we’re working on 8K movies since [some places in the world] are now broadcasting 8K.”

Read more about the restoration in the full article, here. 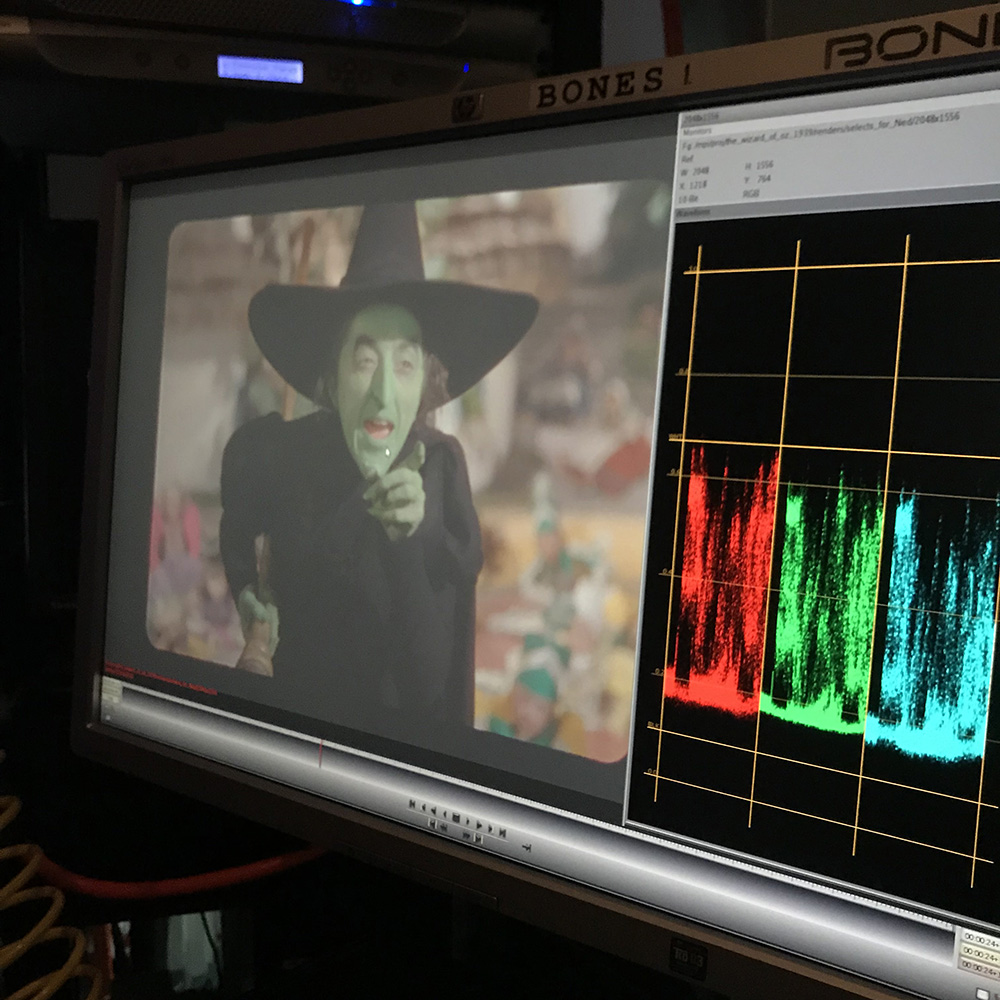 Image by postPerspective at MPI.